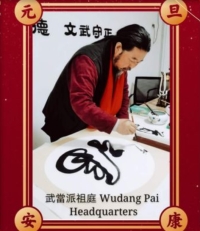 Previously Abbot of the Jin Dian Temple ("The Golden Temple") in Wudang, cradle of Taoism.

Every summer, hundreds of children coming from all regions, travel to the Nan Wudang Temple, with a pure and sincere heart. They spend two months away from their parents and videogames to dive into Taoism through Chinese martial arts, Chinese music and Guqin (a traditional Chinese musical instrument), readings of the Dao De Jing and volounteering.

This experience leads them to get to know themselves, nature; and to respect their own Country and all beings.

On November 25th 2015, the opening Ceremony of the Italian Taoist Association took place.

Grand Master You XuanDe has also been nominated "The most influential Taiji Master" for spreading the teachings of "taiji" all over the world; his disciples coming from over 62 Countries.

For his great contribution to Wudang and martial arts he was recognized as the " Master of Wudang Wushu of Intangible cultural Heritage" (ICH).

The "Tientai Shan" (or Wangmu Shan) is situated in the North of China: it's the Temple dedicated to Wangmu, Supeme Taoist Deity. Emperor Hanwu of the Han Dinasty visited this mountain to worship the Suprem Goddess Wangmu.

(News) To respond to the initiative of the United Nations Educational, Scientific and Cultural Organization (UNESCO) about the “Convention for the Safeguarding of Intangible Cultural Heritage”, Hubei provincial government has granted an important recognition to South Wudang the headquarters - “Intangible Cultural Heritage of China (Wudang Esoteric Impartation of Internal Martial Arts)”. That means our Wudang internal martial arts have been recognized as one of the intangible cultural heritages of China. Another good news is GM You Xuande and his three important disciples Zhou Lican, You Lizong and You Xiaolong were also qualified to be granted as the ‘Official Inheritor’.

In order to safeguard this cultural heritage, South Wudang the headquarters was approved by the government to be the convention base of Wudang martial arts. On 2nd June 2017, Mr.Huang, officer of the local cultural bureau and Grandmaster You Xuande presided over the ceremony of putting up the signboard of ‘Official Protection Base of Inheritor of Intangible Cultural Heritage of China (Wudang Esoteric Impartation of Internal Martial Arts). GM You Xuande, the leader of the 14th generation of Wudang Pai, devotes all his time to the education of Wudang internal martial arts and Taoist cultures.

In April 2018, Grand Master You Xuande has been at Opening Ceremony of Union Taoist of Spain with You Qing,16 generation Wudang Pai.

In November 2019, Grand Master You XuanDe has been at the Opening Ceremony of Union Taoist of France.